Waitrose has today (27th April) announced that it will expand its Deliveroo service to 110 new shops across the country with up to 400 new Waitrose shop roles created by the expansion plan. 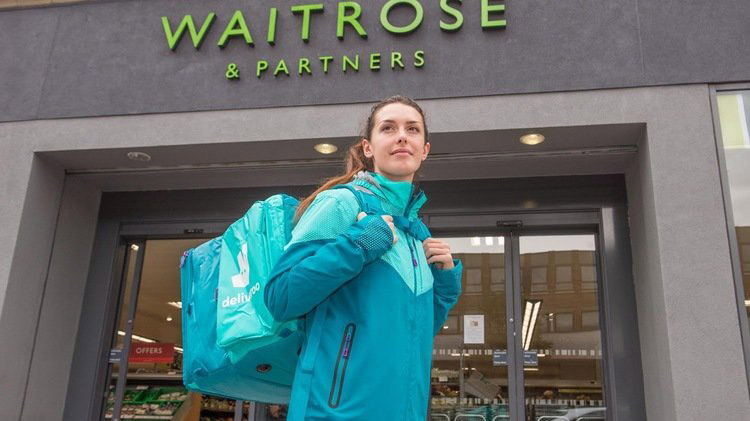 It will increase the number of Waitrose shops on Deliveroo to 150 in total by the end of the summer and is expected to take the number of people who are able to enjoy Waitrose food on Deliveroo to around 13 million. The partnership is a central part of Deliveroo's expansion strategy across the UK, currently at 60% of the UK population, as the company aims to build the best proposition to attract new consumers, restaurants, grocers and riders throughout 2021.

Deliveroo customers will be able to order from an increased range of between 750 to 1,000 products and have it delivered in as little as 20 minutes from Waitrose shops in Scotland, the North West, North East, Midlands, South West, South East and London. New locations on Deliveroo will include shops in Cheltenham, Lincoln, Exeter, York and Sheffield.

Up to 400 new jobs will be created in those Waitrose shops where it's being introduced to fulfil orders ready to be collected and delivered by Deliveroo. All roles will be advertised on jlpjobs.com before the service launches in each location.

Waitrose began a five store trial with Deliveroo in September last year and is currently available from 40 shops. Sales of Waitrose products through Deliveroo have been strong and it's helping to attract new and younger customers.

The expanded range of products includes free-from, dairy alternatives, vegan ranges, flowers and gifts, as well as a selection of product bundles for even greater convenience, including steak dinners, treats such as profiteroles and Prosecco or meals for seasonal occasions. Lemons and avocados are consistently the most popular customer choices, closely followed by bananas, blueberries and strawberries.

We have grown our online business at pace in the last year, responding to huge demand for online groceries and offering more choice in when and how people want to shop with us. We know convenience is key for many of our customers and the expansion of the service with Deliveroo will play an integral role in helping us make Waitrose food more convenient than ever before.

We are delighted to announce a two-year partnership with Waitrose, alongside a nationwide expansion to 150 stores. Waitrose is one of the most respected and loved British companies and we are proud to expand the extremely popular Waitrose service on Deliveroo. As we expand further across the country, this partnership will mean more choice and selection for our customers, delivered in as little as 20 minutes, and will create even more work for riders right across the UK.

Today's announcement demonstrates our ambition to grow our business and reach customers in new ways through developing partnerships alongside our own channels. Our partnership with Deliveroo has already proved extremely popular with the vast majority of customers returning week on week, helping to create a healthy balance of loyalty and attracting new and younger customers.

The new agreement with Deliveroo is the latest example of how the Partnership is working with third parties to offer customers a broader range of products and services. In the past year, the number of John Lewis Click & Collect points has increased to more than 900 locations through collaborations, while Nespresso, Boden and Sweaty Betty orders can also be collected from selected Waitrose and John Lewis shops.

Today's announcement follows Deliveroo's Q1 trading update. Growth accelerated for the fourth consecutive quarter, with Group orders up 114% year-on-year to 71m and 7.1 million monthly active consumers on average in Q1 2021. As of the end of Q1 2021, Deliveroo has reached over 60% of the UK population, adding over 6m people to its coverage.